Eminem Sobriety: From Rehab & Near Death To 12 Years Clean 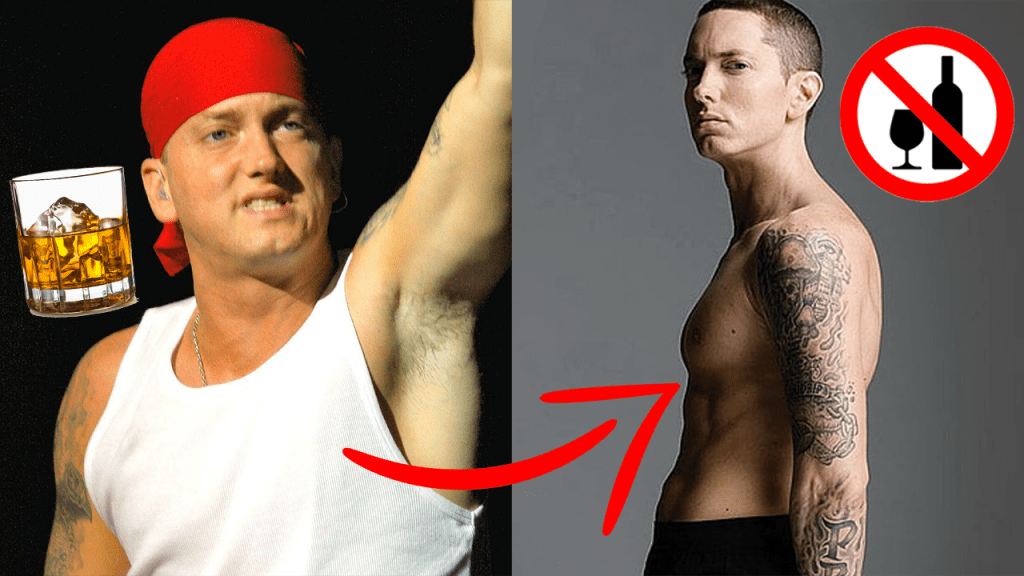 In April last year, Eminem tweeted this photo to his 30 million followers

“Clean dozen, in the books! I’m not afraid.”

It’s been a long ride for the hip hop superstar, from the lowest lows to the most unimaginable levels of success, and then all the way down again.

You’ll learn all about Eminem’s story, as well as how he sobered up, in today’s blog post.

Oh, and we’ll also tell you which music megastar checks up on Eminem regularly to make sure he stays on the straight and narrow.

Guys you will not want to miss this story. It is the stuff of fiction.

Contents hide
1 Who Is Eminem?
1.1 Free Video Training: How To Use First Principles Thinking To Get Control Of Your Drinking Click Here To Watch Now For FREE
2 Eminem’s Relationship With His Parents
3 How His Addiction Has Started
4 What Made Eminem Quit Alcohol So Eminem is undoubtedly the most successful rapper of all time.

Actually, he is one of the most successful music artists of all time. Period.

He’s sold around 250 million records worldwide. This puts him in the same league with the likes of Elton John, Madonna and the Beatles.

He’s won more or less any music award there is, including the 2003 Academy Award for his song “Lose Yourself”.

This was the soundtrack to the partly autobiographical film “8 Mile”, which was also a massive commercial hit But before Eminem shot to fame with his 1999 album The Slim Shady LP, his life was anything but smooth sailing.

His story is inspirational and tragic at the same time.

Born in Missouri in 1972, his parents divorced when we was 2.

His mother was only 20 at the time. After the breakup, his father moved to California, where he fathered 2 more children with another woman.

Eminem’s Relationship With His Parents While growing up, Eminem sent dozens of letters to his father. They were all returned to sender.

In 2001, 2 years after becoming famous, his father attempted to reach out to him.

He told a UK tabloid:

“I desperately want to meet my son and tell him that I love him. “I’m not interested in his money. I just want to talk to him. I want him to know that I’m here for him if he lets me back into his life.” 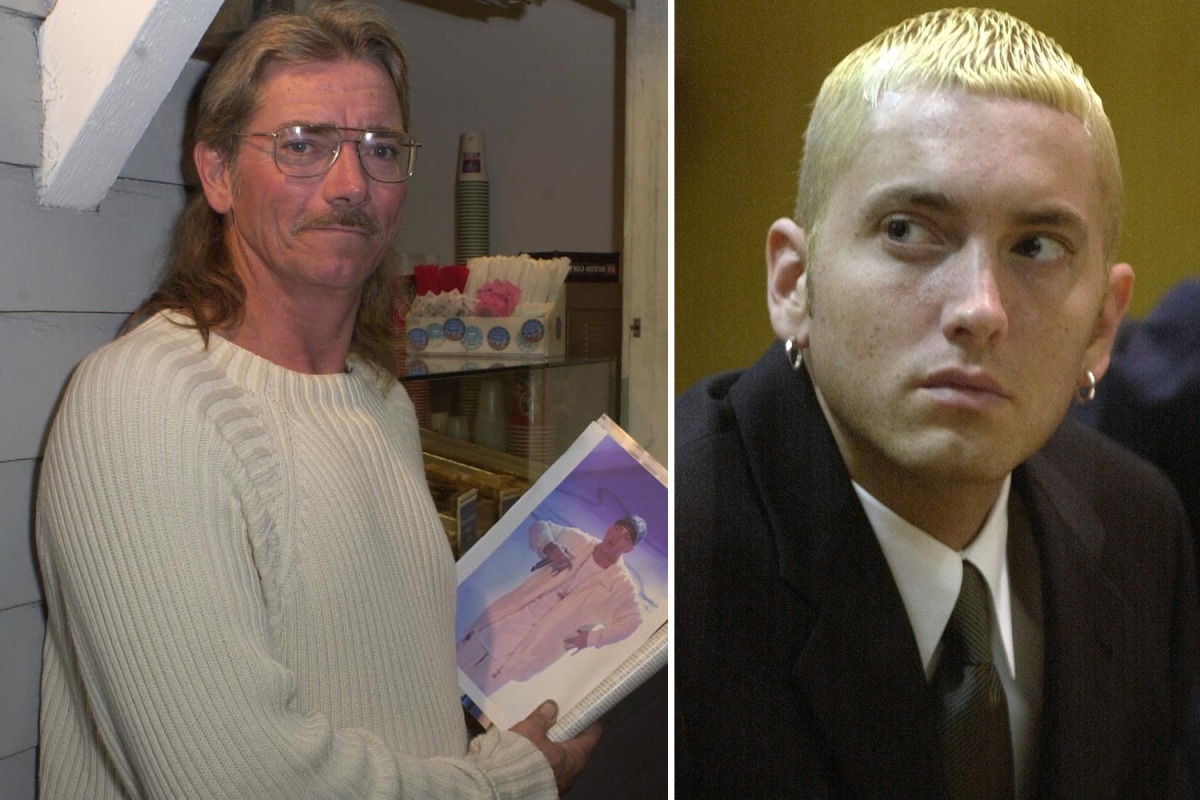 His father passed away in 2019. Despite his pleas, his famous son never saw him again.

After his father left the home, his mother turned to drugs and alcohol.

Eminem grew up in abject poverty. His mother hopped from one low paying job to another, and the two of them spent years moving back and forth between Missouri and Michigan.

Eminem claims his mother was using heroin at the time, something which she strongly denied. He also claims she abused Valium, which she allegedly put in his food to get him to sleep.

After Eminem became famous, he often criticized and ridiculed his mother in his songs.

She fired a lawsuit against him in 1999. She asked for 10 million dollars in damages for slander.

How His Addiction Has Started 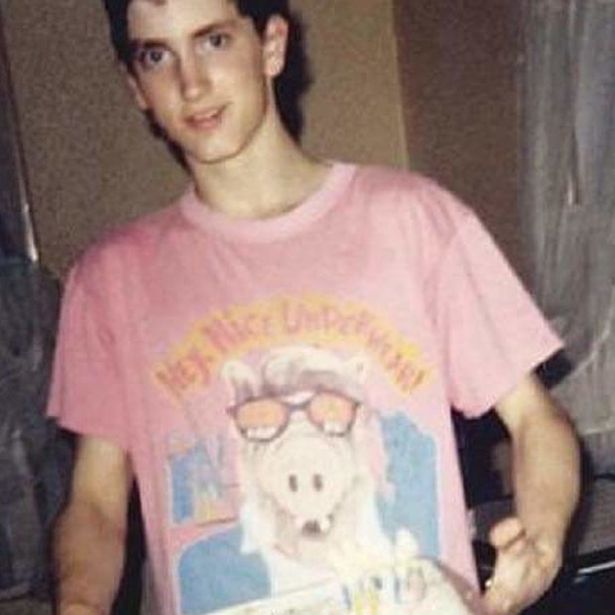 But back to Eminem’s childhood years.

Due to constantly moving schools, he ended up being bullied.

In his own words: “I was beat up in the bathrooms, in the hallways, shoved in the lockers — for the most part for being the new kid“.

Predictably, he became a loner as a teenager, and turned to rap for solace.

His first album in 1996 was a complete flop.

But it was his 1999 album, the Slim Shady LP, that turned him into an overnight superstar.

Over the next 3 years he released two more massively selling albums, establishing himself as arguably the most influential musician in the world.

But hidden behind all this success and money was a very different story.

One of depression, failing and addiction to prescription painkillers and sedatives.

In the summer of 2005, Eminem abruptly cancelled his scheduled European tour, citing exhaustion and quote “other medical issues”. But it was soon revealed that he had entered rehab to kick his drug problems.

In an interview with GQ he went into details about his experience at the rehab.

“Every addict in rehab feels like everyone’s staring at them. With me, everyone was staring at me. I could never be comfortable. There were people there that treated me normally. Then there were a bunch of fucking idiots who aren’t even concentrating on their own sobriety because they’re so worried about mine. They’re stealing my hats, my books – it was chaos. “Everything was drama in there. And, at the time, I didn’t really want to get clean. Everybody else wanted me to. And anyone will tell you, if you’re not ready, nothing is going to change you.”

As you might have guessed from all this, it didn’t take long after rehab for him to relapse again. ‘

In 2006, his close friend and collaborator, rapper Proof, was shot and killed outside a Detroit nightclub. 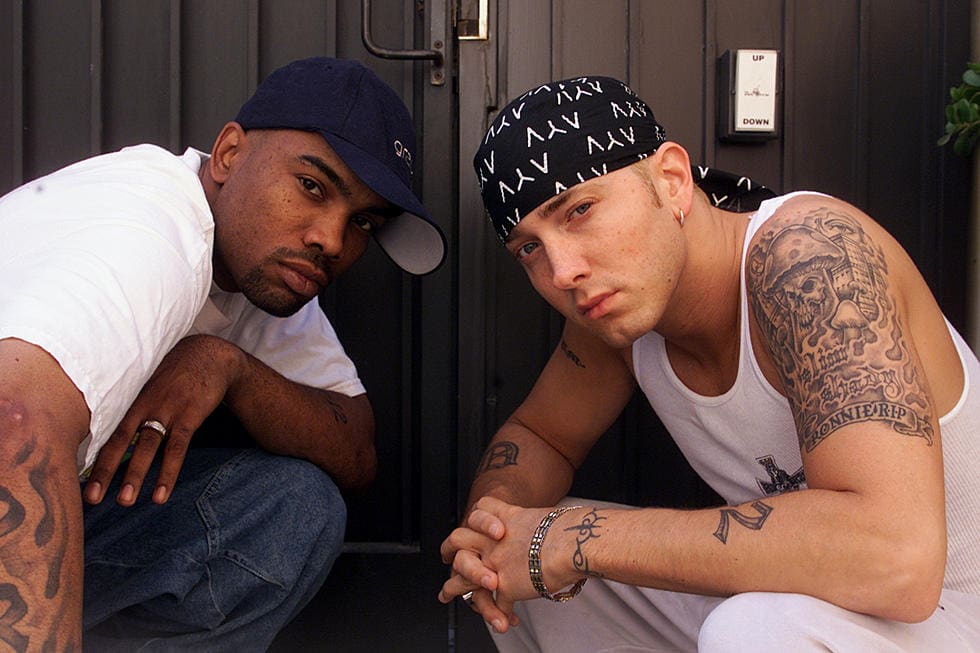 This devastated the famous singer, sending him even deeper into depression.

What Made Eminem Quit Alcohol

Alongside the drug abuse, his health was also failing.

Eminem became a recluse in his Michigan mansion, binging on takeaway every single day.

His weight shot up to 230 pounds, which is massive at only 5ft8.

In an interview with Rolling Stone magazine, he opened up about his weight problems:

“I got up to between 220 and 230, about 80 pounds heavier than I am now. I was going to McDonald’s and Taco Bell every day. […] I got so heavy that people started to not recognize me. 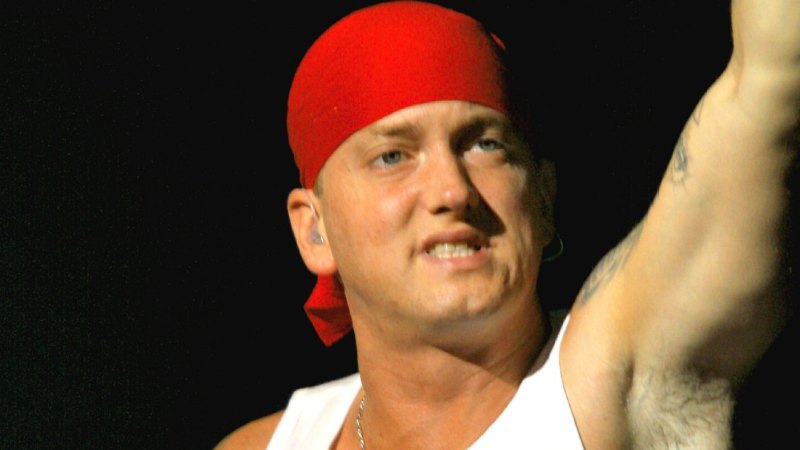 I remember being somewhere and overhearing these kids talking. One of them said, “That’s Eminem,” and the other said, “No it’s not, man – Eminem ain’t fat.” I was like, “Motherfucker.” That’s when I knew I was getting heavy.”

Now guys you’ve probably already figured out that his sleep was seriously messed up too.

Reportedly he could manage about 2 hours of sleep straight. He’d then have to take more pills to go back to sleep.

In 2007, he overdosed on methadone pills, and was urgently admitted to hospital. It later surfaced that the amount he had taken was equivalent to 4 bags of heroin.

Remarkably, after all this, it took him only a month to relapse yet again

A month later, he was back at it again.

In 2008, the superstar had finally had enough, and he decided to turn the corner.

How exactly did he do it? No rehab, no clinics, nothing.

He just hired an addiction councilor, who he continued to see once a week for years afterwards.

As you can imagine, the process was excruciating. Eminem has stated he couldn’t sleep for 3 weeks straight. He was up day and night, watching the TV and walking around like a zombie.

He also had to regain his motor and talking skills.

At the same time as he was going through all this, Eminem reached out to another music legend, 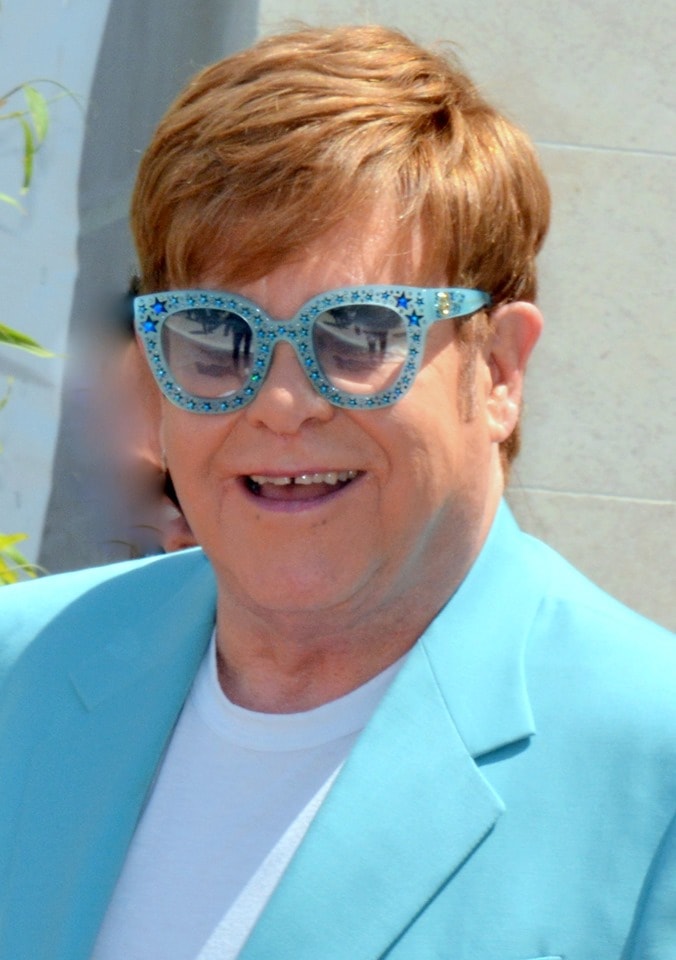 With three decades of sobriety under his belt, Elton John was the best friend and mentor Eminem could have hoped for.

The two first met in 2001, and developed a close bond that has lasted decades.

Elton John would call Eminem weekly and support him on his path to recovery.

To fill in the space previously taken by the pills, Eminem developed a new addiction, a far healthier one this time: exercise.

His weight went down to 149 pounds, which is what he walks around to this day.

Though he has made a full recovery from addiction, the superstar says the years of drug abuse have taken their toll.

He blames the sleeping pill Ambien, in particular, for wiping out long stretches of his memory.

“…a lot of my memory is gone […] it’s kind of a memory-eraser. That sh#t wiped out five years

Nowadays Eminem spends his days between his 2 Michigan mansions.

He’s a very private person, so not much information leaks about his personal life.

There is also no information on any upcoming album release.

All the best for Eminem in whatever he does next. I hope you enjoyed today’s blog.