Liquid Courage: The Surprising Truth about Alcohol and Courage Back when I drank alcohol, I was convinced that drinking alcohol gave me courage. I thought of it like a superpower. I thought of alcohol as “liquid courage”.

It sounds strange, but I almost felt proud of “downing” those drinks. I thought people around me would see me as a dangerous, kind of naughty character.

I thought I had found a “hack” in life. I’d just drink a drink, and then I could do whatever it was that I wanted to do.

Whether that was having an awkward conversation with a colleague, going on a date, or being in a large social setting. As long as I had that drink next to me, everything would be fine. I’d always have that liquid courage within an arms reach.

About to talk to someone new? Sip.

About to talk to a girl? Sip.

About to sing karaoke? Sip.

Actually, I’ve never sung karaoke, but you get the point (lol!)

What was really going on in this situation?

Was I really acting from a place of strength and courage?

Or, was I simply falling for a magical illusion?

Let’s explore this belief down in a little bit more detail.

Contents hide
1 Liquid Courage on a date
2 Alcohol being portrayed as liquid courage
3 Does alcohol really give you courage?
4 What happens to courage after stopping drinking?
5 Examples of courageous acts I have taken since stopping drinking
6 The life of your dreams is truthfully within grasp
7 Tl;dr

Liquid Courage on a date

We all know that alcohol is used widely on dates – particularly first dates.

When two people meet each other, and they’ve never met each other before, a few drinks seems to be the logical thing to do.

If you asked someone who was about to go on a date why they are drinking, they’d probably say something like:

“It steadies the nerves”

“It helps me relax”

“It gives me confidence”

Actually, I’ll be honest with you. Before I took a First Principles approach to stop drinking, I’d have been nodding in agreement.

I also thought that alcohol provided all of this stuff. Why wouldn’t I? It’s what everybody else says, right?

If I was about to meet a girl for a date, I’d have butterflies in my stomach all day. And then, just before meeting the girl, I’d have a racing heart. It would all feel slightly awkward and uncomfortable.

And then, when I drank a drink, all of those awkward feelings immediately disappeared. And if that happened every single time I drank alcohol on a date, then surely alcohol was making the date better. Surely alcohol was giving me liquid courage. Right?

Well, I tested this.

And it’s not true at all.

Before I met my beautiful girlfriend Aor, who you may have already seen in some of my other content, I did go on some sober dates. 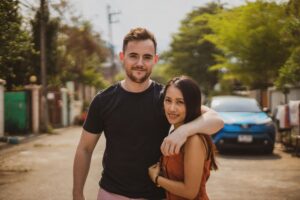 That awkward feeling I described before? Well, it was still there. However, it went away whether I drank alcohol or not.

That awkward feeling before meeting someone new is normal.

And, drinking poison to overcome it is completely unnecessary.

However, what’s most people’s instinct when they sit down with their date? It’s to immediately order a drink. I don’t think there was ever a date I went on, when I was drinking, that didn’t start this way.

But when you give it time – when you sit with the awkwardness – it goes away. And, you start acting from a place of natural confidence.

All alcohol does is remove a few moments on an uncomfortable feeling. It’s like burying your head in the sand.

Alcohol being portrayed as liquid courage

If we look at the way alcohol is portrayed in movies, advertisements, and TV series, we get a distorted view of reality.

What do the main characters of movies or TV series typically do? Think about it.

Tommy Shelby? James Bond? Almost all of the Game of Thrones characters?

They all drink – and they always tend to drink before doing something that’s stressful or scary.

If we believed the nonsense we see in the movies when it comes to drinking, we’d believe that alcohol is giving the character’s courage.

The most damaging thing of all is that we’ve been seeing these kinds of messages since we’ve been born. If all of the characters that we see on the big screen act like this – then surely alcohol must give them courage. 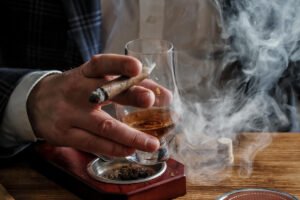 Combine that with 90% of society telling you alcohol gives you courage, and you’re about to walk into the most dangerous trap of all.

This is all part of the societal conditioning I talk about.

We see alcohol being used in a certain situation, and we think that it can help us improve our lives as well.

Here’s a reality check. If alcohol was really good at giving us courage, why don’t we give it to children on their first day of school?

I remember my first day of school. I had butterflies in my stomach, palms were sweating and the adrenaline was pumping. I remember my Mum taking a picture of me in my uniform, and off I walked to school.

As soon as I saw my friends, the fear went. I was feeling more confident.

Did I drink a drop of alcohol to remove that fear? Of course not.

Does alcohol really give you courage?

A question you may have, is does alcohol really give you courage?

Well, the first thing we have to answer is what is courage? Let’s look at a definition of courage:

So, a natural component of acting courageously means using mental strength to venture, despite danger, fear, or difficulty.

Fear has to be present for you to act courageously. If you arrive at a date or a party and the first thing you do is drink alcohol, the fear is simply removed.

It’s a bit like going through a haunted house with a blindfold. Would you say someone that did that was courageous? Of course not. They’d be ridiculed as a coward.

If there’s no fear, you’re not acting courageously, and alcohol doesn’t provide courage.

It provides a very temporary removal of fear. And the cost of that is extreme. You remove fear in exchange for a lifetime of drug addiction, hangovers, wasted money, losing respect from your family, your children asking if you’ve been drinking… 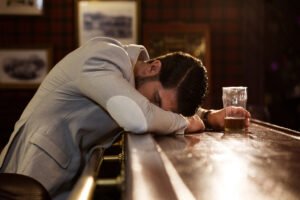 Alcohol does absolutely nothing to provide courage to someone.

It’s impossible for a drink to give you courage.

What happens to courage after stopping drinking?

I know some of you may be reading this, wondering how you’d be able to get through those difficult or scary activities without alcohol.

How will you date again? Speaking in public? Go to parties?

Well, if you take the right approach, which is a First-Principles approach, your courage is restored.

But the approach that you take is everything. If you are able to break down all of the reasons why you drink alcohol, and systematically break them down (similar to how we have just looked into courage), then you realize that alcohol gives you nothing.

It takes everything away from you.

Once you get to this state of mind, and you understand the truth, you’re in a position that a tiny fraction of drinkers are in.

And like magic, your courage is restored. I’ve worked with people that said they felt like their 20-year old self again. They feel like the “old” version of them is back.

And it happened to me as well. My courage was instantly restored. Sure, I made some big, scary decisions. But, I was totally okay with all of them – because I’m acting from a place of true courage, instead of burying my head in the sand.

Examples of courageous acts I have taken since stopping drinking

Even when I drank, I still had some ambition that existed in the back of my mind. It got quieter and quieter the further I got into the trap, but it was always there.

Once I got rid of alcohol, my courage came back – almost instantly.

Within days of going through the First Principles approach to stop, I started a personal training business. This is a fully self-employed position that requires courage. Every day, you have to talk to people on the gym floor and face rejection.

I felt no desire to drink and acted from a place of true courage.

After a few months of building this business, I felt unstoppable. I really felt as though I could achieve anything. So, I created a new vision. I wanted to move to Thailand and start working online.

I booked a ticket and told myself I will be able to figure things out. 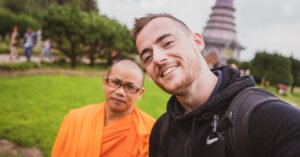 Low and behold, I did. Did it take courage to do this? Yes. But I had this new sense of confidence and self-belief that wasn’t there when I drank alcohol.

And now, I’ve started a new company, I post my experiences on the internet and I have a wonderful partner.

These are all things that took huge amounts of courage – but I am able to face these things now I’m sober. And, I can act from a much more authentic place.

The life of your dreams is truthfully within grasp

I know this may sound outlandish, but when you take the right approach to stop drinking, the life of your dreams becomes possible again.

It’s why I talk about the First Principles approach so much.

When you take a First Principles approach to stop drinking, everything becomes possible again.

You don’t sit around and wait for a magical moment. You simply go towards a better life for yourself.

You do the things you wanted to do when you were a drinker, but for whatever reason you couldn’t do them.

In my instance, that was becoming self-employed, traveling the world, getting into another relationship.

It was all the things I wanted to do when I drank, but could never manage to do it.

I really mean it – but the life of your dreams becomes a possibility when you take the right approach to stop drinking.

Whilst you may be convinced alcohol gives you courage, all it does is remove fear.

Most drinkers think they drink alcohol for a myriad of reasons, but most of them aren’t true.

In the media, alcohol is always portrayed as “liquid courage” – but it’s so far from the truth.

Alcohol has no power to give you courage, but when you take the right approach to stopping drinking, your natural courage is restored.

The life of your dreams becomes within grasp again, once you take the right approach to stop.